The Blessing of Children (part I)

Recently Justin and I have been hearing quite a few negatives about large families (not from everyone of course). And I’m not talking about octuplets. I’m talking about three kids. What?! Since when is that big? My dad was one of six and my best friend growing up was one of six too (her parents had brothers and sisters that they didn’t even know because there were so many of them and they were so spread out).

We prayed for many years before we were granted Kate. Then Gabby came quickly there after. Through out the Bible there are examples of women, once barren who were given one or more children: Sarah, Rebeka, Hannah, and Elizabeth. We are grateful to have one child and overjoyed to have been granted two children to love and raise. We love children and hope to see our family grow at least one more time. Why would such a blessing from God been seen as a bad thing?

We know we aren’t alone. Some of our dear friends are having their third child, and they are often asked if they decided to try for that boy (they have two little beautiful, intelligent girls too). And it’s assumed that this is their last “chance.” It makes them (and me) frustrated. They don’t think three is too many, nor do they try to have more children, just so they can have a certain gender. They love children and believe that they are a blessing!

We had a negative comment when I was expecting our second child, now one of Justin’s colleagues was pressing him because we have “reached our replacement value” by having two. In his mind that meant we shouldn’t even consider adding to our family. We don’t believe that families should be based on “replacing ourselves.” But if we did, do we get to have the extra credits for the fact his parents only had one child and my sister doesn’t plan to have any? Who gets to decide?

What does God say? Well, if you read the Levitical code, the instructions for relations between a husband and wife pretty well set them up to conceive more children. If you’ve ever studied natural family planning, the instructions in Leviticus are written to wait to have relations until the woman is at her most fertile time. He wanted lots of Israelites. More people to worship Him, do things His way, care for others, live according to His laws. If Christians are continually out populated, how can we reach the hurting? We can’t!

My children are a blessing and a gift. I'm not saying everyone needs to have lots (or any) children, but I will be joyful in my blessings--2 or 15.

Sons are a heritage from the LORD, children a reward from him. Like arrows in the hands of a warrior are sons born in one's youth. Blessed is the man whose quiver is full of them. They will not be put to shame when they contend with their enemies in the gate. –Psalm 127:3-5

Besides, when your kids are this cute, how can you stop at just two? 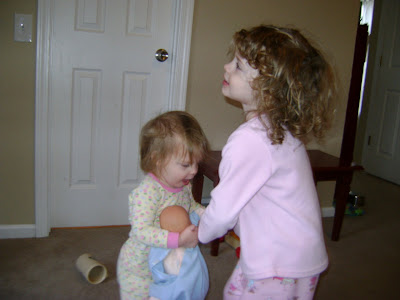 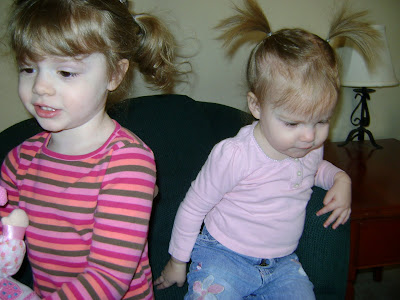 How many children you have is a very personal decision that is for you, your spouse and your God to decide. As long as you are willing and able to provide for them physically and emotionally then you are under no obligation to listen to people who say you should only replace yourself. I have seen how much love you have to share with your family and when and if you decide to have more children I support your decision to have them. Love you!!

1. Upon more pondering and realizing that if you have more children I will be even *further* back in the chow line at family meals... I think you should stop now! ;-)

2. When people complain as they invariably will, simply explain to them that your children will be paying for their social security.

Ryan: Gabby will be in line this year--look out!

Mama: I know you don't think that way! We have some saving to do before another addition though.

I assume you are being sarcastic?!

Tabitha (From Single to Married) said...

I agree - the more children, the merrier! My dad is one out of 11 and my mom had five kids so I'm all about big families. Unfortunately, since I got married later in life, I probably won't be able to have a huge family of my own but we'll see. :)

Ryan, in reference to you point number 2:
"2. When people complain as they invariably will, simply explain to them that your children will be paying for their social security."
While I totally agree, a swift fist to the face often works to shut them up as well!
In Christian love, of course.
-jjs